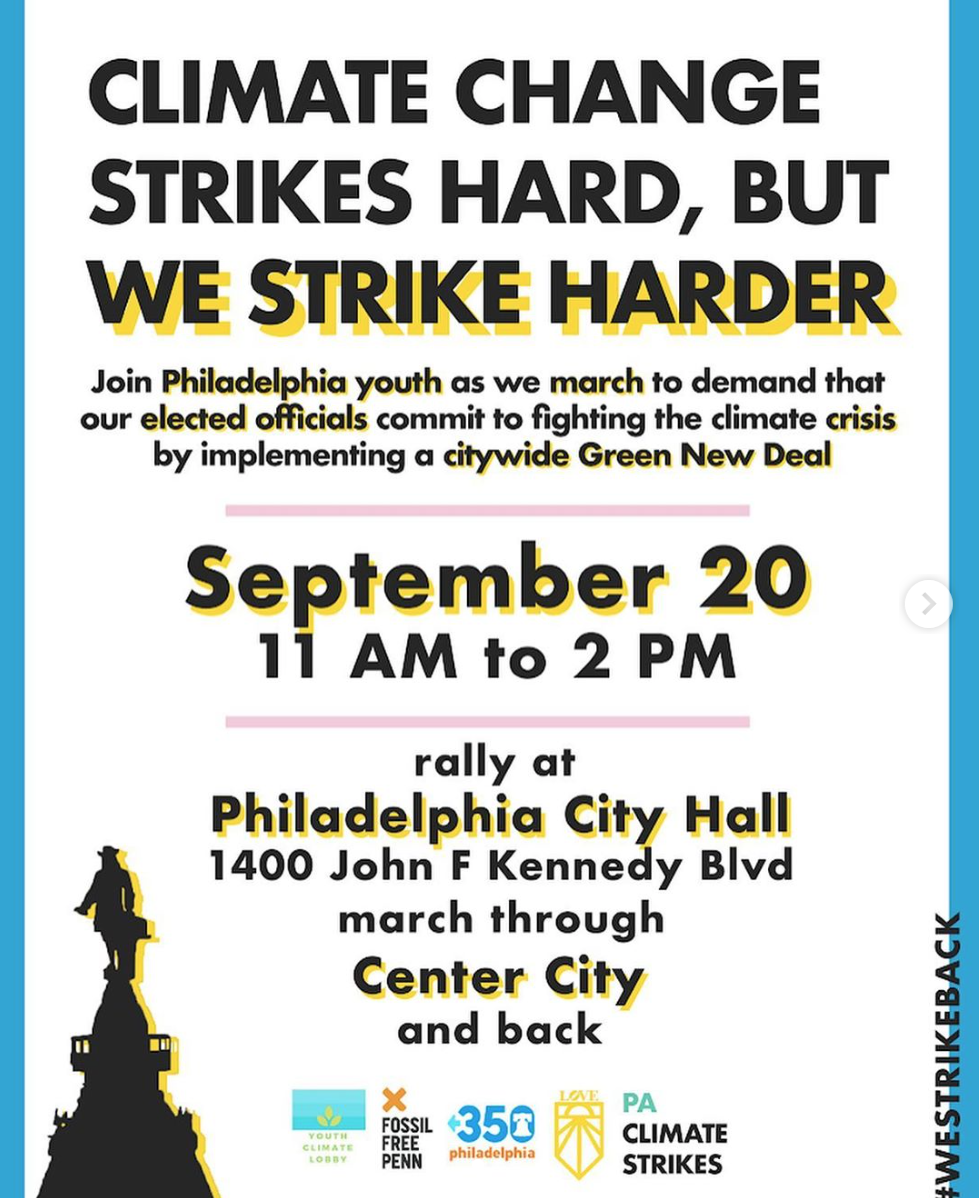 This show will air at noon Friday September 13, 2019 on PhillyCAM’s radio station WPPM 106.5 LP FM in Philadelphia. Hear the audio afterwards as a podcast. The script is below. Produced by Meenal Raval.

Our last episode was about 2 months ago, about the little town that could stand up to the state and declare a ban on single-use plastic bags. The summer hiatus has been great and we’re back to offer a perspective on local climate happenings.

Did I travel this summer? No. Did I have adventures? Oh yeah! And did I think about the climate crisis? Every single day. So, what’s happened this summer?

It’s September. With summer vacations almost over, children are getting ready to go back to school. And this year, back to school means back to an event called, “School Strike for Climate.”

There’s a Global Climate Strike planned for Friday, September 20, days before the United Nations Climate Summit in New York City on September 23. The Global Climate Strike invites people of all ages to strike—by refusing to attend work and school—to disrupt the social order and to push our governments to act on the climate emergency we find ourselves in. Imagine the disruption possible when both young and old join forces.

Started in August 2018 by 16-year-old Greta Thunberg of Sweden camping outside local government offices until they treat the climate crisis like the emergency it is, the movement has spread like wildfire—to Europe, Australia and within 4 months, the rest of the world. The School Strike for Climate is dubbed Youth Climate Strike US, and locally, Climate Strike PA.

Why are our youth in the United States striking? Because we have only 11 years to prevent even worse effects of climate change. Their platform lists demands of the federal, state and local governments:

Locally, I’ve met many young people inspired by Greta, who rise for climate.

Sabirah Mahmud, a high school student who organized the Climate Strike rallies first in March and then again in May, launched a boot camp in July for youth new to Climate Strike PA.

“The climate crisis is going to affect us all in different ways and it’s so important for us to take action,” Mahmud says.

With 30 new people attending the organization’s boot camp—where students learned about civil disobedience, the climate crisis and more—the September school strike for climate is expected to bring more people. Mahmud tells us they may plan a march in Center City Philadelphia that morning. With details still being worked out as of this writing, the Climate Strike PA team asks interested parties to follow it on social media.

“Let’s make September 20th the biggest strike to ever take place and make our governments accountable for their inaction against this global crisis,” she says.

Mahmud also asks youth all over Pennsylvania to get their own school involved and “champion for a strike” wherever they are by contacting Climate Strike PA.

Over Memorial Day weekend, 12-year-old Hadassah Weinmartin organized the “first meeting ever” of the Sunrise Movement’s Northwest Philly hub. This first house party brought in 25 of her friends, and 10 of their parents.

Since that first hub meeting, Weinmartin has organized another local meeting, as well as a presidential debate watch party. She’s the youngest with the Sunrise Philly team.

Her message to us? “You’re never too young to make a difference.”

So while the story of this summer has been the refinery discussions, the story of September will be the climate strikes.

And now, a sampling of the 1.5 minute climate lectures by Penn professors. What’s this?

In October 2018, the Intergovernmental Panel on Climate Change announced that limiting global warming to 1.5°C would require rapid, far-reaching and unprecedented change in all aspects of society.

As a knowledge center and institution of learning, it is Penn’s responsibility to inform the University community about the causes and wide-ranging consequences of climate change and to advocate for the unprecedented changes the climate emergency requires.

This September, professors and students from across the University will unite in a series of 1.5 Minute Climate Lectures to sound the alarm about the climate emergency, to call for large-scale climate action, and to share a vision of constructive and comprehensive response.

What follows is a recording of Megan Ryerson, UPS Chair of Transportation and Associate Dean for Research at the Stuart Weitzman School of Design earlier this month.

That was News You Can Use.

Ask your legislator to embrace goals of 100% renewable energy, and begin the transition for all sectors today. Because, fossil fuels are so 20th century, right?

Connect with Concerned Others

Before the big strike, organizers have planned two “art builds” to paint posters. Both are this weekend.

There are also strikes in West Chester, in Bethlehem, and in Doylestown, even at retirement homes. Details on our Connect page.

This is Meenal, at Philly Talks Climate. Thanks for listening!

We are right now in the beginning of a climate and ecological crisis,
And we need to call it what it is.
An emergency.
We must acknowledge that we do not have the situation under control
and that we don’t have all the solutions, yet.

Unless those solutions mean that we simply stop doing certain things,
We must admit that we are losing this battle.
We have to acknowledge that the older generations have failed.
All the political movements in their present form have failed.
But homo sapiens has not yet failed.

Yes, we are failing
But there is still time to turn everything around.
We can still fix this,
We still have everything in our own hands.

But unless we recognize the overall failures of our current systems
We most probably don’t stand a chance.

We are facing a disaster of unspoken sufferings for enormous amounts of people,
and now is not the time for speaking politely
or focusing on what we can or cannot say.
Now is the time to speak clearly.

Solving the climate crisis is the greatest and most complex challenge that homo sapiens have ever faced.

The main solution, however, is so simple that even a small child can understand it. We have to stop our emissions of greenhouse gases.
And either we do that or we don’t.

You say that nothing in life is black or white,
But that is a lie,
A very dangerous lie.

Now we all have a choice.
We can create transformational action that will safeguard the living conditions for future generations.
Or we can continue with our business as usual, and fail.
That is up to you and me.

And yes, we need a system change rather than individual change,
but you cannot have one without the other.

If you look thru history, all the big changes in society haver been started by people at the grassroots level, people like you and me.
So I ask you to please wake up and make the changes required, possible.

To do your best is no longer good enough.
We must all do the seemingly impossible.

Today we use about 100 million barrels of oil every single day.
There are no politics to change that.
There are no rules to keep that oil in the ground.
So we can no longer save the world by playing by the rules.
Because the rules have to be changed.

Everything needs to change.
And it has to start today.

So, everyone out there, it is now time for civil disobedience.
It is time to rebel.